Driverless Trucks: Not If, But When?

Home » Technology » Driverless Trucks: Not If, But When?

Now there are companies like Otto, founded by two former Google execs and a team from former Apple and Tesla employees, which are focusing on self-driving commercial trucks, rather than passenger vehicles. With this autonomous truck technology in the works, it is obvious that driverless trucks have the capacity to change how we move some 43 million tons of goods across the country daily. The question is no longer ‘if’ we can create self-driving trucks, but rather ‘when’ these trucks will be the norm. 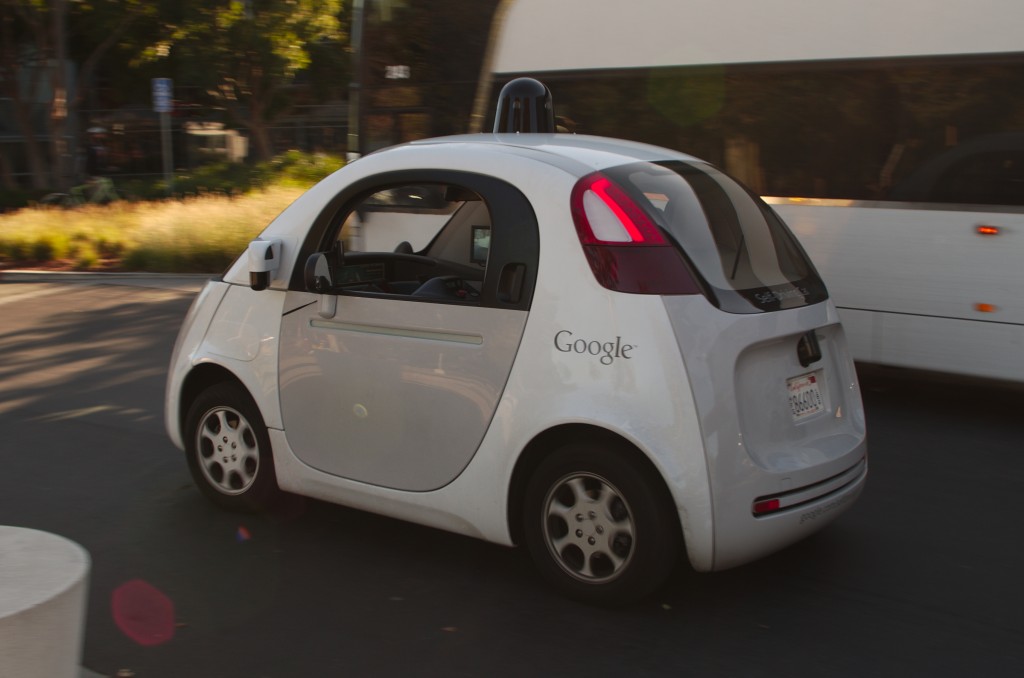 Google has been working on self-driving cars since 2009. Credit: Wikipedia

Currently, commercial trucks make up just one percent of all traffic, but are responsible for 28 percent of road pollution, according to the U.S. Department of Transportation 2015 Annual Report. Commercial trucks are also involved in a large number of accidents and fatalities each year. On top of that, there is a shortage of drivers, causing some companies to put young or inexperienced drivers behind the wheel before they are actually ready.

Proponents of driverless trucks see how this technology can change the future in many ways. These trucks would greatly increase productivity as there would be little to no downtime. Drivers can currently only drive for a limit of 11 hours. With about 4.3 million commercial trucks that would need to be replaced or upgraded, it would revive U.S. manufacturing, creating thousands of jobs. Driverless trucks would reduce emissions and reduce deaths from traffic accidents because they would be safer drivers than humans.

What some people seem to forget is that with this new technology, millions of U.S. drivers will put out of work.

The human cost of self-driving trucks

With the introduction of driverless trucks, we will see millions of truck drivers lose their jobs, which will leave a large amount of unskilled workers that will be competing for fewer and fewer jobs. 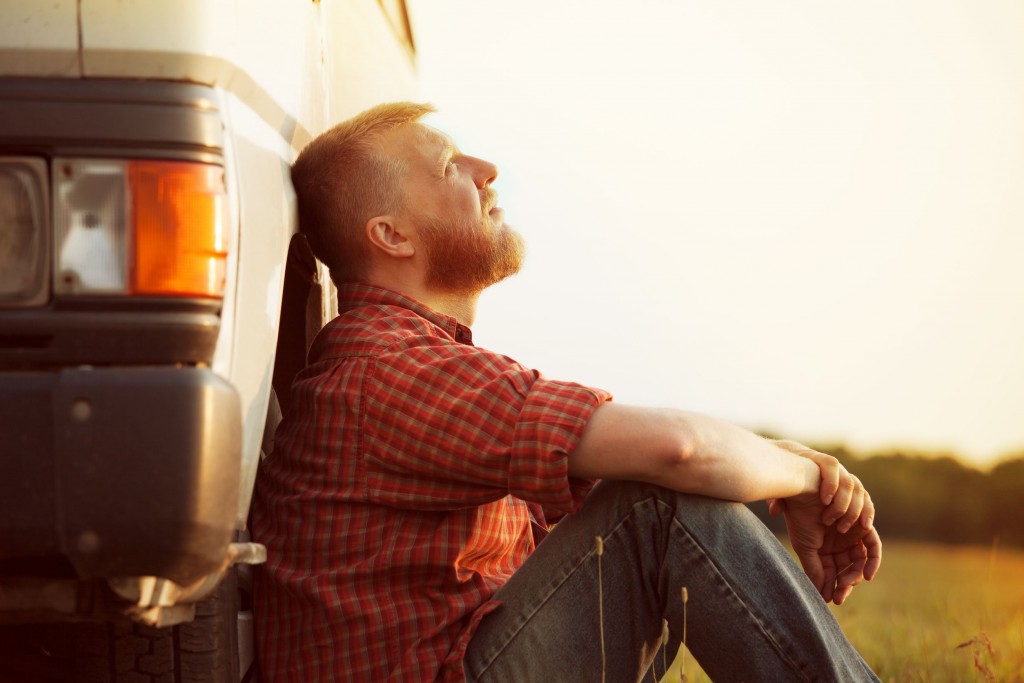 Millions of truck drivers will lose their jobs to self-driving commercial trucks. What does their future hold?

The job loss wouldn’t just stop with just the drivers. Automating trucks in this country will also cost jobs to the many people that work at the various truck stops and motels that rely on truckers. The healthcare providers, insurance agents, and lawyers that depend on truckers would also find themselves looking for a new job, perhaps in a totally different industry.

There have already been car manufacturers that are trying their hand at driverless trucks. In 2014, Mercedes-Benz unveiled their “long-haul truck of the future”, Future Truck 2025.

This truck won’t be available for about a decade, but will trade drivers for “transport managers” who will control the truck for things like merging onto and exiting highways or driving in construction zones. Driven by a system called “Highway Pilot”, the truck is able to stay in the center of the lane, brake automatically, it can move lanes in case of emergency vehicles, or to give room to broken-down vehicles on the shoulder.

This lets the cab become an office, allowing drivers to use a fully connected tablet to plan for their current trip, next trip or check on the condition of the freight in the semi trailer.

In 2015, the Freightliner Inspiration became the first licensed autonomous truck to operate on an open public highway in the United States. The truck is responsible for maintaining speed, keeping a safe braking distance, and stopping or slowing the vehicle based on road and traffic conditions.

It will not pass slower vehicles unless the driver’s hands are on the wheel and will also alert drivers to unusual road circumstances. If the driver does not respond, the computer will automatically slow the truck and stop the vehicle on the shoulder.

These are just two examples of trucks that are being tested and driving our roads to make this driverless truck tech dream a reality. Automated driving computers are never angry, tired, or unknowingly nodding off. These computers will be constantly learning and improving.

They will be able to take in large amounts of data regarding the road surfaces, routing, weather conditions and even other drivers’ behavior. This means that these trucks will be safer, more aware, can avoid things like potholes, optimize delivery time and use fuel efficiently.

Not if, but when

Some experts in the self-driving truck sector believe that changes may come in just a decade. Though the technology may be ready to roll out on a large scale at that time, passenger vehicles are likely to be first to automate, and commercial trucks will likely be last due to their size and public opinion.

At first, the public will not be uncomfortable with the idea of trucks not having drivers. Even when driverless trucks begin to roll out, there will still likely be a driver on board, but driving will be their secondary job. Instead, they will operate much like the way airline pilots do with autopilot: make sure things are operating smoothly, and intervene in the case of emergencies. 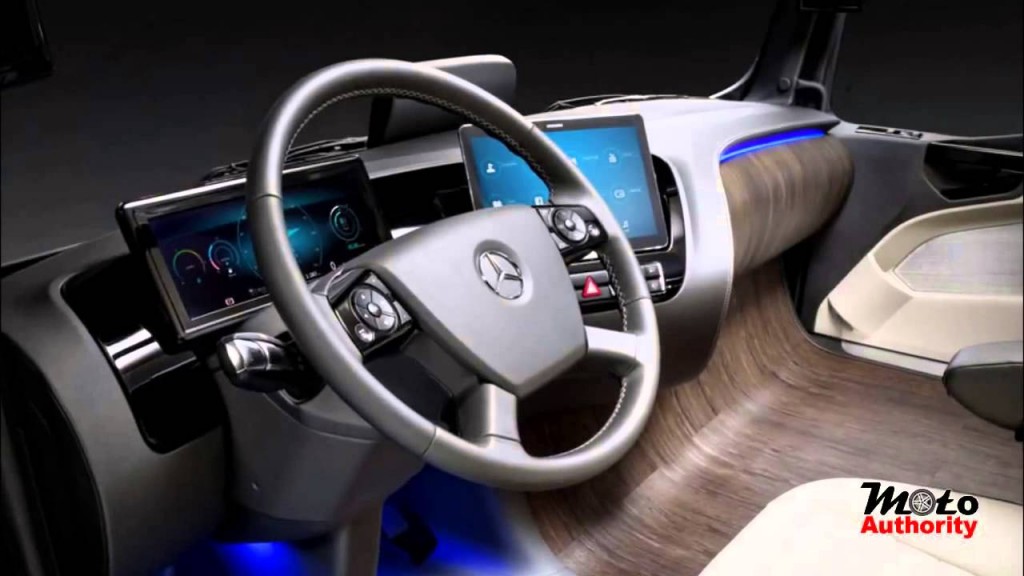 From cab to office: the interior of the Mercedes-Benz Future Truck 2025. Credit: Youtube.com/motoauthority

Beyond making the public feel comfortable, there will also be some ethical and safety issues to look at. Hackers love a challenge, and if the data and computers on these trucks are not secure, then who is to say that hackers or terrorists will not disrupt our trucking operations or worse, cause a catastrophic tragedy? Also, who will be responsible for accidents when they do happen?

There are still some questions that need to be answered about how these trucks would be regulated and how the implementation process would work. However, one thing is for sure: the commercial trucking industry is going to see major changes in the next few years.

How many years? I guess we’ll all have to just wait and see.