The eHighway: Using Existing Infrastructure for a Better Future

In an attempt to operate a fossil-fuel-independent transit system by 2030, Sweden has unveiled its first electric highway using a system from Siemens. This overhead-powered eHighway system will help to reduce carbon emissions and air pollution.

While some would rather argue whether or not global warming and climate change exist, there are others that have already seen the devastating effects of greenhouse gases and air pollution, and they are doing something about it.

Road freight transportation is heavily dependent on traditional combustion engines running on unsustainable fossil fuels. Medium and heavy-duty trucks, big rigs, and delivery vans make up just 7 percent of all vehicles on U.S. highway, but use more than 25 percent of the oil.

In some places, the air quality can be so poor, people in the area are encouraged to wear breathing masks.

The emissions from these vehicles have a harmful effect on air quality. Transportation is responsible for a large part of the carbon monoxide, nitrogen oxides and particulate matter found in the air.

A 2013 study at MIT found that air pollution causes 200,000 premature deaths annually in the United States. Emissions from road transportation are the largest contributor, responsible for 53,000 early deaths per year. Californians suffer the worst health impacts with about 21,000 early deaths each year.

The effects of air pollution on humans can be deadly. The tiny particles that make up particulate matter can end up deep in the respiratory system causing lung irritation or inflammation, lung diseases, and changing blood chemistry, which could lead to heart attacks.

Those affected may experience symptoms as small as burning eyes, and as serious as breathing problems or death. In places severely affected by air pollution and smog like Beijing, new conditions such as the ‘Beijing Cough” are becoming all too common.

First eHighway on a public road

After developing the system since 2011, on June 22, Siemens AG opened the world’s first public electric highway in Sweden. This is one of the country’s first steps to obtaining their goal of operating a fossil-fuel free transit system by 2030.

The eHighway system was developed for heavily used truck routes as an energy-efficient, low-emission solution. Siemens’ system uses overhead cables on roads coupled with electric or hybrid trucks specifically built for the eHighway. This new system can be built on top of existing infrastructure, which helps cut down on future implementation costs.

The chief engineer at the Siemens Mobility Division, Roland Edel speaks to the benefits of the eHighway system, “Not only is energy consumption cut by half, but local air pollution is reduced, too.” The eHighway system is about twice as efficient as diesel trucks, and extremely energy efficient, allowing trucks to feed energy from braking, back into the grid.

Sweden will test a 1.25 mile stretch of highway north of Stockholm for the next two years. Through 2017, the company, in partnership with Volvo and the South Coast Air Quality Management District, will also conduct test near the ports of Los Angeles and Long Beach, California. 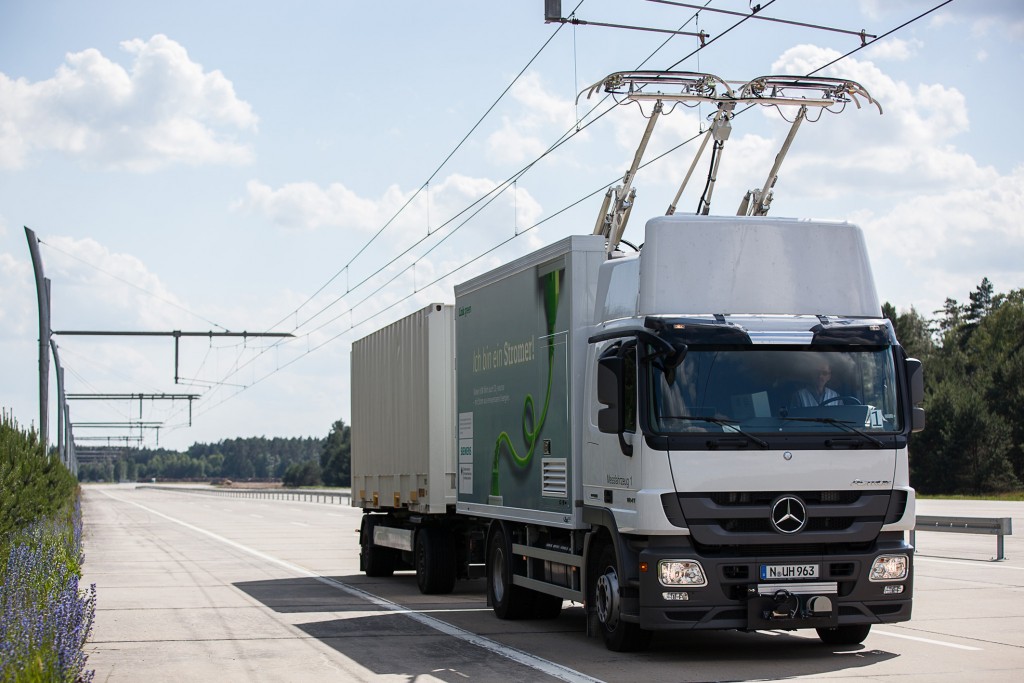 All around, we see various organizations trying to make trucking better for its drivers, and the environment. California recently upheld their ruling regarding their 2008 California Statewide Truck and Bus Rule. This means that trucks are still going to be required to use newer (made in 2010 or later) environmentally friendly engines or emission-compliant engines.

We have seen companies like Mercedes-Benz and Freightliner introduce driverless long-haul trucks that will help to safely transport goods more efficiently in the future. These trucks combined with eHighway technology could make for an environmentally friendly, cost-efficient future in freight transport.