Trucking and Terror: An Interview With Joseph Fink

Trucking and Terror: An Interview With Joseph Fink

It’s like you’re living a nightmare. Your significant other goes missing – gone without a trace. You spend months on the road, searching, and searching, for what? A ghost? A shadow? A live person? You eventually find out that horrible monsters (actual monsters) are responsible for your partner’s disappearance. You begin to uncover some much more dark and depraved as you unravel the mystery of the disappearance. Welcome to the mind of Joseph Fink. What’s described above is the actual plot of his latest book and podcast, Alice Isn’t Dead. This podcast and book is the perfect tale for truckers to enjoy while out on the road! That is if you can hold your nerve.

Fink is no stranger to the strange and macabre. In fact, he’s made a living on it for quite some time now. He began with his first podcast, Welcome to Night Vale, which highlighted the strange events that would occur in a fictional desert town “somewhere in the southwest.” Picture it like the traditional news broadcast you might hear while you’re truckin’ across state lines, except with aliens and shadow creatures that only come out during a full moon. Fink followed that podcast up with other projects including a Welcome to Night Vale novel and a spin-off novel from the podcast, titled It Devours!. Fink returned with yet another spin-off novel which follows truck driver Keisha Taylor as she crisscrosses the country searching for her wife. Luckily, we had the chance to sit down with Fink as he was getting ready to embark on a live podcast tour.

5 Things to Know About Joseph Fink

He Too, Spent Many Hours on the Road

Believe it or not, despite being a podcast host and writer, Joseph Fink actually shares a lot in common with truckers. While he wouldn’t say that he specifically wrote for the “trucker demographic,” his time spent doing book tours and spending countless hours in a car certainly helped him get into the mindset of a trucker. “The day to day routine is pretty similar. Getting up every morning and then driving all day, and then ending up in a different place where you don’t really see any of that place because you’re there to work. I do think that experience is a pretty understandable one to anybody who travels for a living,” he said.

However, He Does Little Research

“Part of the reason I write strange fiction is because I really hate research. I really hate having to fact check my fiction in a lot of ways,” he explained. Despite little research, Fink was really able to capture what life is like on the road for the trucker. The novel blends the supernatural with raw emotions that many of us feel every day. He makes the unbelievable, believable. 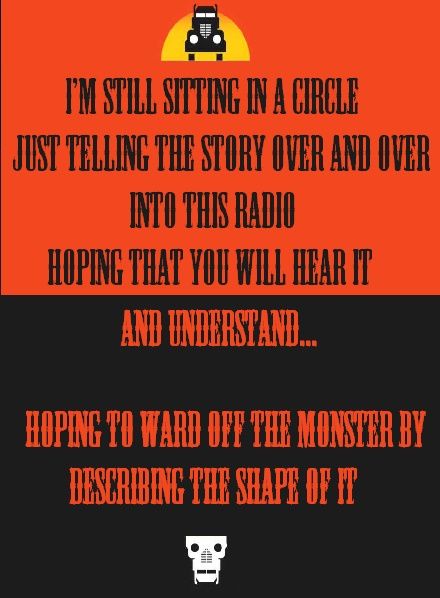 He Doesn’t Buy Into the Trucker Stereotypes

He Had a Feeling his First Podcast Was Special

Back when Welcome to Night Vale released, podcasting was certainly popular, but it definitely wasn’t the booming medium it is today. What began as just a creative outlet quickly gave Fink the financial freedom to pursue other projects, and while he didn’t expect the huge following he would gain, he does acknowledge that he knew he had a unique project on his hands. “I had no expectations at all for the podcast. It was just a thing to do, it was a project to make. I remember putting together the first episode of Welcome to Night Vale and I just walked around my neighborhood listening to it over and over again and it just seemed very complete and specific.”

He’s Got Plenty of Other Projects in the Works

While he remains mum on the details, Fink has plenty of other projects in the works that he’ll be sharing with the world in the near future. While balancing his many podcasts, he also mentions in the interview some of the other podcasts that his channel hosts that you might want to check out. These include Conversations With People Who Hate Me and Dreamboy. Joseph Fink will also be embarking on another live podcast tour this Spring!

If you’re looking for an awesome podcast to add to your queue or book to pass the time on the road, look no further than Alice Isn’t Dead.