The US National Highway Traffic Safety Administration has finally closed its investigation into a fatal crash involving a tractor-trailer and a Tesla Model S using its autopilot function.

Since the incident, many have become weary of just how safe autopilot features and autonomous vehicles actually are when driving public roads. Although it is by no means an underdeveloped technology haphazardly unleashed onto the open road (the Model S had a research and development budget of $1.5 billion) there are still many questions and considerations driving the future of trucking.

Unfortunately, the crash led to the death of the Model S driver, Joshua Brown, although the report has now determined that his vehicle was indeed functioning properly. According to the US National Highway Traffic Safety Administration, there were no defects found in the system and there will be no sweeping order to recall the Model S. Still, it’s clear that self-driving vehicles and autopilot features do not seamlessly pair with purely human drivers just yet.

Model S to the Test

So how exactly does The Autopilot system work? Essentially, a series of cameras, radar, and computers work to determine the location and speed of objects surrounding the vehicle. The system then automatically applies the breaks when necessary, and can even change lanes, merge into traffic, and take the necessary highway exits. Here is a video clip of this system in action:

It’s an amazing time to be alive when our cars are becoming better drivers than we are, and yet this still relies on making the leap from lifeless computations to real world responses. It’s a big, wide world out there and we’d be kidding ourselves to say all roads are nicely paved with cleanly painted lines – something The Autopilot system requires for optimum results. Although it’s easy to knock the system completely, research does show that used correctly, the Autosteer function can help eliminate accidents by nearly 40 percent: 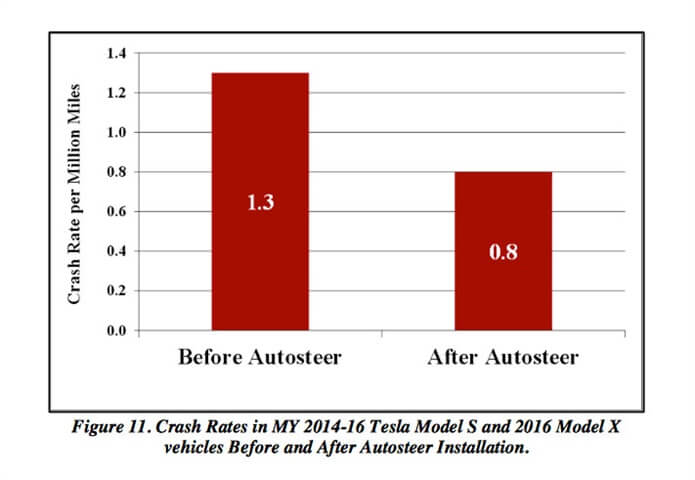 What Caused the Accident?

In the case of Joshua Brown, his Model S failed to recognize the white side of the tractor’s trailer from the brightly lit surroundings, and so it never applied the brakes. This led to the car plowing into the side of the trailer, sadly resulting in a fatal crash. The driver of the truck was unharmed, however, this raises more questions about how drivers can respond to the phenomenon of autonomous vehicles thrown into the mix of public roadways.

To start, drivers of all Tesla vehicles featuring The Autopilot system are still instructed to pay attention to their surroundings and be ready to take over at any time. We’re still quite far off from the prospect of napping or completely focusing elsewhere. As for truckers, the technology in your cab is also likely to grow more advanced and capable of interpreting surrounding vehicle speeds, hazards, and more – still it requires human judgment to keep such a smart system in check.

If you’re a career driver, be prepared to come up against all sorts of new technology, whether it’s in your own rig, fleet, or the surrounding public roads. We may not see completely self-driving cars too soon, but it’s not an impossibility. For now, we’ll keep following this autonomous vehicle phenomenon to see whatever comes next!