Hacking ELDs and Cybersecurity in Trucks

As we continue living in the post-ELD mandate era, concerns over these devices persist. At this point, the FMCSA estimates that 3 million drivers use electronic logging devices. Failure to comply means the risk of out-of-service violations among others. Although many are still fighting the sweeping decision by the Supreme court requiring these devices, there are other concerns in need of attention. Hacking ELDs and cybersecurity in trucks is something we can’t ignore, no matter where you stand on the current mandate.

Search for Truck Jobs by Freight or Driver Type Today!

Hacking ELDs and Cybersecurity in Trucks

Just like many of the other devices consumers adopt each year, ELDs feature a connectivity that adds them to the growing Internet of Things (IoT). Sure, being able to sync our entire array of phones, tablets, watches, and other appliances is convenient, but the question always comes back to security and privacy. In 2016, AT&T issued a report wherein they discuss a 3,198 percent increase in the number of attackers scanning for vulnerabilities in IoT devices. In a follow-up survey, 58 percent of businesses utilizing devices with cellular connectivity were not confident in the security of these technologies. 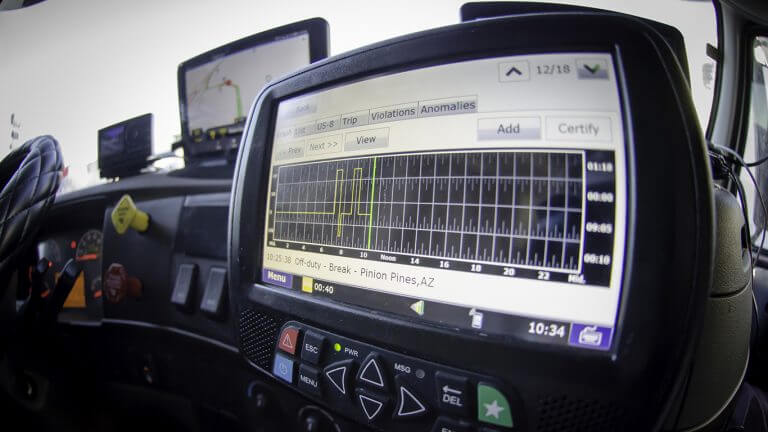 Now, with e-logs required to connect via cellular data plans, among the many other technologies coming online in modern vehicles, concerns over hacking ELDs and cybersecurity in trucks are as tangible as ever. Skeptics of these devices often cite their intrusive nature, but the possibility of security breaches brings this to a new level. As billions of dollars worth of cargo are hauled each year, ELDs present themselves as the obvious prey of hackers, cargo thieves, and others. Still, the main questions focus on the extent to which vehicles remain vulnerable in terms of their mechanics and actual operation.

Another study from 2016 conducted by the University of Michigan made headlines when researchers showed just how vulnerable some big rigs actually are. By electronically accessing a 2006 tractor’s diagnostics port, the researchers changed readouts from the truck’s instrument panel, trigger unintended acceleration, and even disable one form of the vehicle’s braking system. Of course, this is incredibly alarming considering that since the late 90’s fleets began implementing a range of telematic devices used to capture data from engines and other systems.

In terms of hacking ELDs and cybersecurity in trucks today, experts like Marco Encinas from Teletrac Navman contend that hacking these devices is virtually impossible. He writes,

“we don’t give (our application) rights to be able to write or make requests — all we do is read. There is no protocol in the system that allows us to engage, change code for or manipulate the ECM computer on the vehicle.”

Other companies like PeopleNet have actually embedded chips in ELDs to authenticate their connection between the vehicle and cloud management systems. Eric Witty, vice president of product for PeopleNet also told Equipment World:

“Our latest devices will all ship with an encryption chip built in to authenticate the device to the cloud in addition to standard authentication of the driver’s credentials upon login. That way, we have the assurance that both the device and the person are authenticated in our system.”

Cyber Safety for the Future of Trucking

Luckily, most if not all ELD manufacturers prevent their devices from communicating directing with vehicles themselves. This means any vulnerabilities inherent in these other systems in trucks experience greater security through ELD connectivity. In terms of hacking ELDs and cybersecurity in trucks, we still have a long way to go in terms of their adoption throughout the industry. Still, a lot of the data provided and processed by ELDs is company-specific information, meaning there’s little chance of a driver’s personal details becoming compromised. Additionally, most devices also report faults or errors immediately to their host clouds, making it well-known when a potential threat or cyber attack is underway.

Do you have experience in the cybersecurity of ELDs or trucking? We’d love to hear from you in the comments below!