5 Things I Learned at GATS

Posted By Hit The Road Jack on Aug 28 | 0 comments

Last week I attended my first ever annual Great American Trucking Show (GATS) in Dallas, Texas. I had an absolutely amazing time in the “Big D.” Heck, I had a great time in Texas altogether. I’m pretty sure I ate steak for every meal while I was in town…but I digress. Anyway, attending the show was a great way to really learn about the culture of the trucking industry, even more than I knew before. Here’s the low down on all the crazy things I took away from my experience at GATS.

1. You can’t judge a book by its cover in trucking.

Traditi0nally, people think of truckers as “biker-esque” masculine types, right? But, holy cheese and rice is that cliche WRONG! Truck drivers at GATS came from every walk of life. And, they came from all over the Globe. There’s no preconceived driver standard. I met the coolest truck drivers from all over the country; big cities to small country towns. AND, I met truckers from down under in Australia and from all the way up in the Swiss alps.

Also, the females in trucking are totally not what you’d expect. The cutest and most petite lady-driver can actually be a tougher and more bada$$ than the fellas. And, even though they disregard played-out gender roles for their occupation, they still do not necessarily possess a “Tomboy” persona. They still wear makeup and skirts when they feel like it. Just because you are a female in a male-dominated industry, does not mean you play a certain list of rules.

2. There is a Pirates of the Caribbean truck in the world. 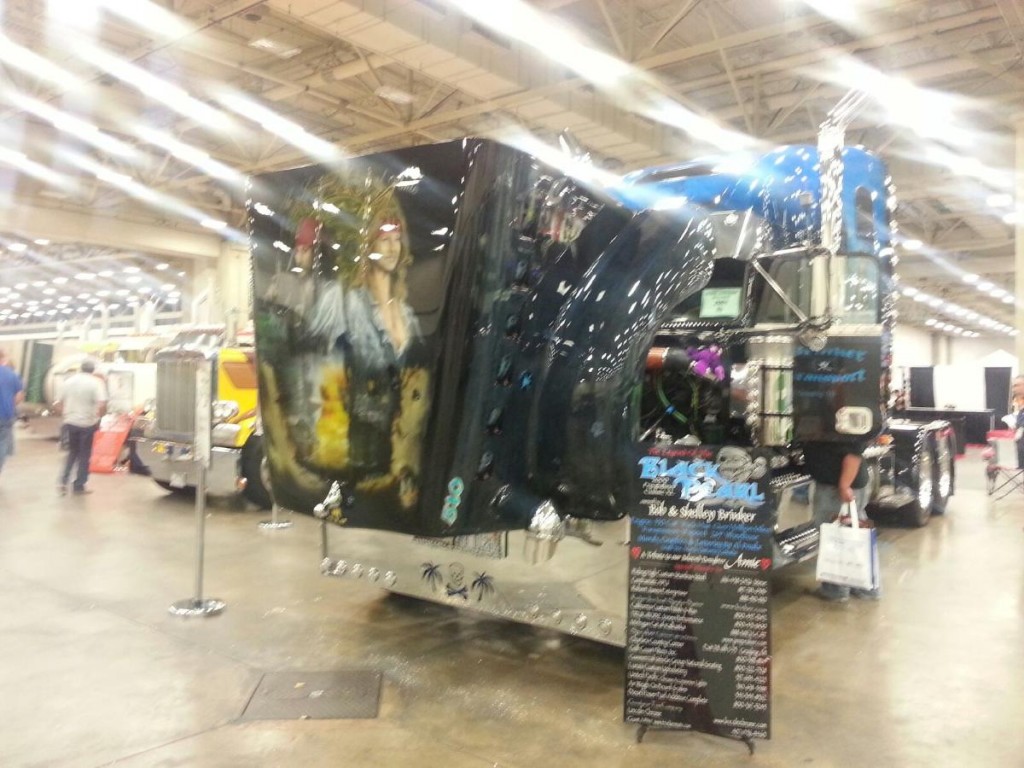 Yes, you read that title right. Let me reiterate, THERE IS A PIRATES OF THE CARIBBEAN TRUCK that actually exists. The semi features visually stunning paint in vibrant blacks and purples and even Johnny Depp would be taken back with the artist’s craftsmanship. The 18-wheeler, named “the Black Pearl” is basically a nautical mobile museum. Literally, everything is pirate themed in some way down to the “wood-panel treasure chest” looking engine to the mechanical parrot in the cabin.

3. No matter who you are, everyone loves free stuff.

GATS is such a huge event in a massive building. There were stands everywhere handing out everything from tote bags, pens and pins to free electronic-massage testing and booths filled with flying cash. Men, women, young and old alike; we’re all guilty of being naturally drawn to the best things in life…the free things! Basically, the show was like Trick-or-Treating in August. There was just so many companies there in such a ginormous arena that there was much free loot to be had. But hey, I’m not complaining.

4. There are so many products that I never knew existed (that now I need.)

In my GATS exploration, I found some seriously amazing gadgets that are out there on the market that are just so amazing that I can’t believe I have lived my whole life without them in it. From coolers with built in cup-holders that could keep my drink cool and have attachments to charge my iPhone to handheld massages that basically look like iPods. As soon as I got home from the Great American Truck Show, I started a new budget so I can buy all the new toys I saw there!

P.S. I’m currently taking up donations so feel free to send me large quantities money so I can get my paws  on the sweet trucking gear I saw at the show. 😉

5. The trucking industry has a tight-knit yet accepting community.

The most evident thing I took away from GATS was the highly remarkable sense of community there. Truck drivers and their families, companies, and everyone in between congregated in such a cool way. Everyone seemingly knew so many of the people there. It was like a huge room of an extensive family. It made me feel good. Everyone and anyone was accepted and it only finalized my opinion that truckers are great people.