Joanne Fatta: the Most Beautiful Trucker 2015

Posted By Hit The Road Jack on Aug 03 | 7 comments

AllTruckJobs.com was lucky enough to be visited by Joanne C. Fatta, this year’s winner of Overdrive Magazine’s Most Beautiful truck driver contest. The single mother and breast cancer survivor earned more votes than 86 other entrants. However, she won’t let the title go to her head as she keeps a positive attitude and her feet humbly planted in the ground. 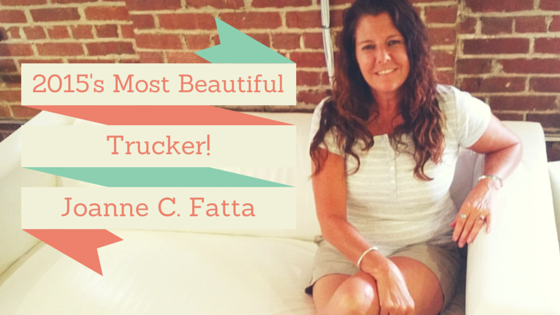 “I have heard people say, ‘You’re the prettiest female driver I’ve ever seen.’ And I always say back to them, ‘when was the last time you saw one?'”

Before Fatta had been the skilled truck driver of over 15 years she is today, she was working as a waitress and before that a legal secretary. Those jobs, although being honest work, were not enough for a single mother to comfortably live on. She wanted to independently provide for her daughter without anyone else’s help.  It wasn’t until she found herself in a “new choices” career class with a good friend that she was introduced to the idea of trucking after attending a seminar about male-dominated careers. She remarked how its kind of crazy that women have to put themselves in a “man’s job” to be able to financially support yourself.

“I got myself into a good program,” said Fatta,”the PA department of education paid for my CDL training and even paid for my daughter’s daycare.” Within five weeks, she had earned her CDL and was offered a job at Sunrise Transport, where she is still happily employed even 15+ years later. Joanne remarked that many people don’t even realize the great opportunities to get paid training and get into the driving industry.

Initially, she came on fresh with no experience and many guys seemed to find it strange seeing a women doing “men’s work.” However, after a while of sacrificing, starting with crappy trucks, crappy routes, weekend work, bad hours, etc., she has been able to move up and also earn the respect of her fellow drivers. “[being a female driver] can make you feel like you’re on the stage. People look in like, ‘there’s a girl out there.’ And, they want to see if they’ll succeed or fail.”

Fatta hit some bumps in the road when she was diagnosed with breast cancer in 2013. For an entire year she worked hard despite countless doctor visits, surgeries, and treatments she had to endure. Her hard work apparently was noticed and in February 2014, she was named the driver of the year for 2013. She was the first female to ever win the award and now she even has her name on her tractor.

As a driver and instructor, Fatta realizes that although driving is a great career that she loves, it isn’t for everyone. “I like helping people get to where they want to be. But, if it isn’t for you, think about it before you waste the time,” she said.

Fatta will be officially crowned winner of Overdrive’s Most Beautiful at GATS in Dallas, TX this august. While she’s there she’ll also be participating in the Fit for the Road 5k Run  where the proceeds will benefit the St. Christopher Truckers Development & Relief Fund.

Joanne’s Advice for Other Women in Trucking: “People on the road will either respect you or not. You have to be careful how you behave Always remember that you want to be respected. Have a good attitude and work hard.”