Can You Carry a Gun in a Commercial Vehicle?

Can You Carry a Gun in a Commercial Vehicle?

Home » Road Rules » Can You Carry a Gun in a Commercial Vehicle?

Driving to new locations on a daily basis can definitely bring a sense of adventure and a self-reliant attitude. Like a pioneer charting new paths to find an ideal way to live, hauling interstate loads may be the closest thing to the fabled American cowboy (and cowgirl) left in the United States. And yet while it may not be the Wild West, that doesn’t mean you want to leave yourself exposed in a risky situation requiring self-defense. So, can you carry a gun in a commercial vehicle?

Can You Carry a Gun in a Commercial Vehicle? Understanding the Law

Whether you drive across the country or generally stay within the borders of your state, staying safe is the top priority of good commercial drivers. However, beyond the standard pre-trip inspection and maintaining your stellar personal driving record, there may come a time when carrying firearms as a trucker is your last option for protecting your load and, of course, your own life.

Now, there’s been lots of controversy over the availability of firearms in the United States over the decades and even in recent times. Still, the Second Amendment exists as a law for self-defense and can obviously be abused by irresponsible gun owners or people with wicked intentions. And while it’s not difficult to become a licensed gun owner, driving across state lines can quickly make carrying firearms as a trucker into a blurry and confusing legal landscape. Really, it might seem simple but it’s a question many have: can you carry a gun in a commercial vehicle and if so, to what extent?

So, let’s start with the basics:

Normal drivers can transport firearms; however, the basic rule of thumb is that they are to be kept out of reach of the driver or passengers. That could mean putting them in the trunk, or better yet, locking them inside a hard-sided container — obviously unloaded and stored separately from any and all ammunition. This can be confusing for those who drive a station wagon, truck, or any other car without a trunk, although best practices suggest putting cable locks on the firearm’s trigger or simply keeping it in a locked box. Additionally, leaving the gun visible while it is disabled can help in the event you need to alert police of the firearm’s presence. So, can you carry a gun in a commercial vehicle?

Here’s what Federal law says about the matter:

Notwithstanding any other provision of any law or any rule or regulation of a State or any political subdivision thereof, any person who is not otherwise prohibited by this chapter from transporting, shipping, or receiving a firearm shall be entitled to transport a firearm for any lawful purpose from any place where he may lawfully possess and carry such firearm to any other place where he may lawfully possess and carry such firearm if, during such transportation the firearm is unloaded, and neither the firearm nor any ammunition being transported is readily accessible or is directly accessible from the passenger compartment of such transporting vehicle: Provided, That in the case of a vehicle without a compartment separate from the driver’s compartment the firearm or ammunition shall be contained in a locked container other than the glove compartment or console.

Moving one step further, we have concealed carry permits, allowing individuals to carry a loaded weapon for easy access. This is the point where carrying firearms as a trucker becomes particularly hazy.

According to the Department of Transportation’s past statement on the matter, “carrying concealed weapons is a matter of state law. Your question can best be answered by the appropriate state government.”

Without much Federal guidance on the matter, you’ll need to focus on becoming thoroughly knowledgeable on matters of reciprocity. Sure, you can have a concealed carry permit in Pennsylvania, but drive down to Delaware and you’ll be in the wrong… and that goes for all of the Northeastern United States besides Vermont and New Hampshire.

Here’s a useful resource to check if your gun permit is legal in other states:

Should the situation arise where you’re forced to use your firearm in self-defense, you should have full legal backing behind you. As of 2017, the House of Representatives approved a bill, the Concealed Carry Reciprocity Act, that allows truck drivers’ concealed carry permits valid in every single state. That being said, this is only valid if the trucker has the required documents on them at all times. Some truckers and even those in authority say it’s perfectly legal, while others cite their experiences of difficulty during interactions with law enforcement. Go ahead and Google: can you carry a gun in a commercial vehicle … it’s not likely to give you an immediate answer without wading you through various state codes, federal laws, and even local laws.

It Comes Down to Employment

With something so pressing and essential to one’s rights as an American citizen, it’s baffling how ill-defined carrying firearms as a trucker truly is. Still, one thing is for certain: Know your employer’s firearm policy!

Before learning the granular details of how to transport, carry, or conceal firearms across state lines as a commercial driver check with your employer to know their exact rules on how to exercise your 2nd Amendment right. If it’s more a matter of hobby and fascination with firearms, you may want to consider other methods of self-defense. Be careful though, some states don’t allow any weapons whatsoever in a commercial vehicle.

However, it can’t be overstated enough that drivers would rather lose their jobs before losing their lives. Of course, we’re not advocating that people should violate the wishes of their company, yet those individuals who want to legally carry a firearm will continue to do so regardless of most federal, state, or employer rules. Maybe it’s less a question of can you carry a gun in a commercial vehicle, but rather should truckers carry guns. 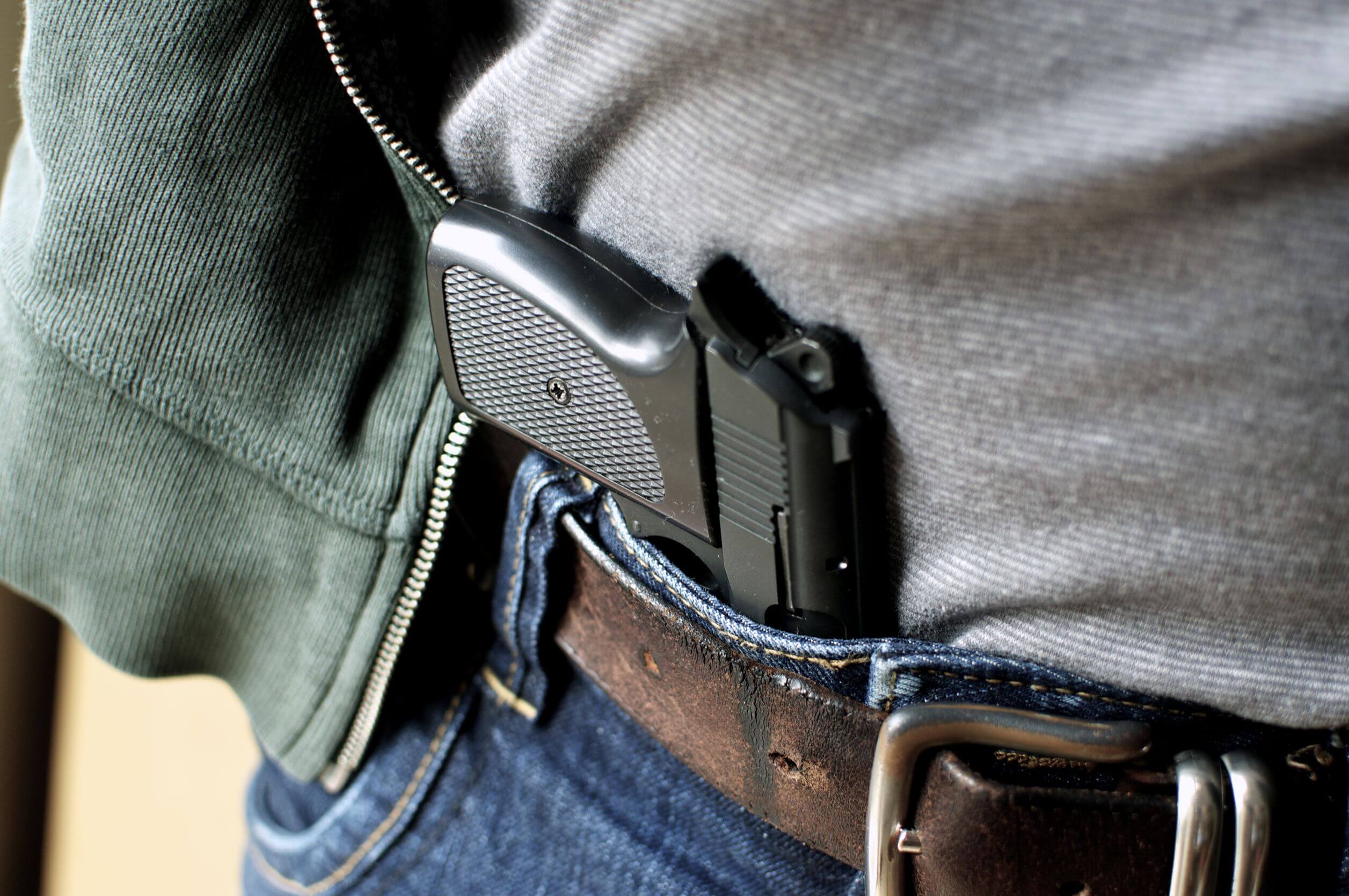 Truckers shouldn’t have to balance their employment with their right to self-defense, although there are two sides to the story.

Hopefully, carrying firearms as a trucker means you’ll only discharge your weapon on the firing range or a safe location at home. That said, we have to be realistic here. Drivers can encounter all sorts of unsavory situations and dangers on the road, and being unarmed while hauling valuable cargo shouldn’t be the reason someone loses their life.

Should a circumstance of self-defense arise, having a gun in the cab is always the last resort. Until new types of permits are devised, and laws change (if they ever do) stay safe and sensible on the road. As always, check with your employer, read your state’s laws, review federal guidelines, always have the proper paperwork available, and above all, use your head when it comes to carrying firearms as a trucker!

What are your experiences with carrying firearms on the road? Let us know your thoughts in the comments below!