Truckers Against Trafficking: How Drivers Can Take Action

Last month, a trucker from Virginia noticed strange behavior happening in an RV at a Pilot gas station and immediately alerted the authorities. The heroic driver, Kevin Kimmel, knew as soon as his suspected something that it was only right to immediately to take action.

“Saw what looked like a young girl looking out the window, the black drapes didn’t make it look like a families’ RV, you know,” Kimmel told a local TV station. “I saw a guy come up and knock on the door then go inside the Pilot — then quickly came back and knocked again, all of the sudden the thing was rocking and rolling.”

Without the quick moving efforts of Kimmel, the young girl may have been forced into continued torture from her captives. However gruesome and shocking this story was, unfortunately, it’s certainly not the first (or last) time truckers have eye-witnessed sex slavery while on the clock. And, there’s usually more behind a “Lot Lizard” that meets the eye. Many if not most sex workers are forced into the trade unwillingly and are unable to leave for fear of harm to them or their families from their pimps.

In 2009, Lynn Thompson and her ministry, Chapter 61 Ministries launched the original concept for Truckers Against Trafficking (TAT.) Two years later, Thompson’s daughter, Kendis Paris, helped grow the organization and took the role as executive director. “No one in our family had any connections with the trucking industry, we just all believed that if this industry became aware of the realities of domestic sex trafficking that they would use their unique position as the eyes and ears of our nation’s highways to affect change in this area and that is exactly what’s happening,” said Paris.

What is human trafficking?

According to TruckersAgainstTrafficking.org, “Human Trafficking is modern-day slavery. Traffickers use force, fraud, and coercion to control their victims.”

Startling facts about sex trafficking (courtesy of The Covering House):

What should you do if you see suspicious activity?

According to TAT, anyone who sees ” a minor selling commercial sex or suspects pimp control” to call the National Trafficking Resource Center at 1-888-373-7888 to report anything you know. Polaris, a large DC-based anti-trafficking organization runs the hotline and keeps all tips anonymous and confidential. 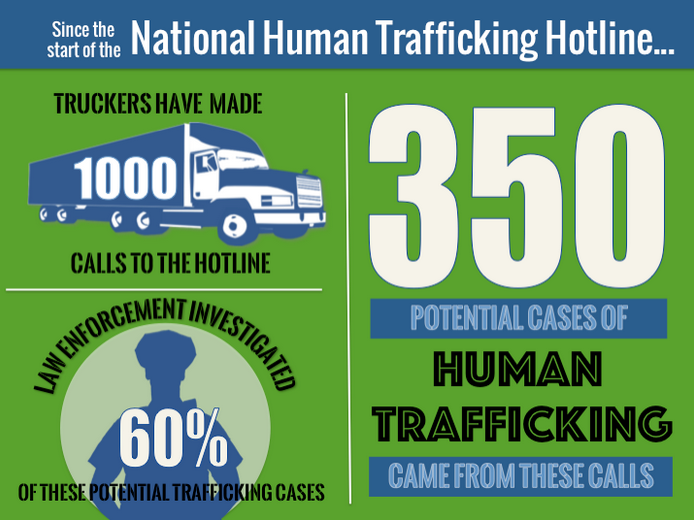 Paris warns, “If the driver witnesses a crime in progress like Kevin did, they should call 911 first, but then we ask them to call the hotline as well so that the data can be collected and we can begin to see what this crime looks like across America. Oftentimes, drivers aren’t sure they’re looking at a human trafficking situation, which is why we instruct them to call the hotline as well, because then they will be talking to a trained call specialist 24/7 who will help them assess the situation.”

Specific tips called “actionable information” that are helpful to include when calling in a report include:

Where does human trafficking occur?

How is TAT is making a difference?

Trucks Against Trafficking was created to give the proper resources and education to “members of the trucking and travel plaza industry to combat domestic sex trafficking” in order to combat the crime.

Currently, TAT has launched the Freedom Drivers Project (FDP), a mobile exhibit that is on tour to educate the public about sex trafficking and how the transportation industry is fighting it. You can see when FDP is coming to you here.

You can donate to TAT here.