Team Driving vs. Solo Driving: Is it Right For You?

Home » Big Rig Banter » Team Driving vs. Solo Driving: Is it Right For You?

Team Driving vs. Solo Driving: Is it Right For You?
5 1 vote

Now that you’ve decided to pursue a career in trucking, it’s time to figure out what type of trucker you want to be. It’s best explained by making a simple sports analogy. There are guys and gals that preferred team sports, whether it be football, basketball, or soccer, while others chose to ride solo, participating in sports like wrestling, tennis, and swimming. Just like your preference in sports, you’ll want to decide whether you want to be a team trucker or stick to hitting the road alone. There are pros and cons for the team driving vs. solo driving debate, and it really depends on you! Below are just a few things to think about before you decide to hit the road as a team driver or solo driver.

Team Driving vs. Solo Driving: Is it Right for You?

What Is Team Driving?

Team driving is pretty much what it sounds like. A truck driver and another truck driver agree to sign on with a carrier to make runs together. So, why are so many driving companies looking for team drivers to fill their rigs? Team driving is all about keeping the truck in motion and the goods moving. When there are two drivers in a truck, one can take the wheel while the other relaxes or does whatever they want to do on their off time. This keeps the freight moving along the highways and productivity at a very high level. 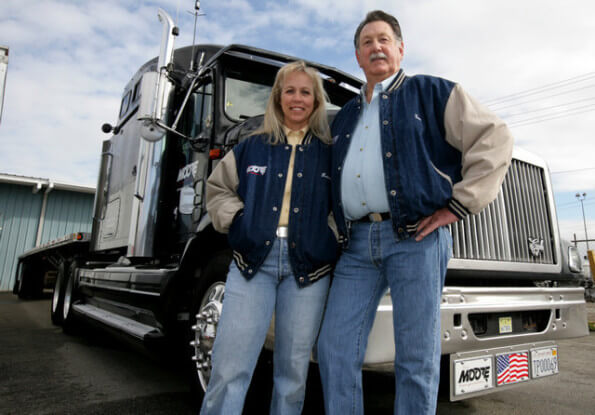 Bringing your partner on the road is a great way to experience team driving.

One of the biggest polarizing factors of the team driving vs. solo driving debate is deciding whether or not you want the company of another driver while on the road. One reason that many choose to ride solo is simply the fact that they are able to be in control at all times. Solo drivers don’t have to worry as much about where they store their belongings, how they make their bunk, or how many clothes they pack for the trip. At the end of the day, it’s your truck, so settle into what best fits you. Let’s face it, some of us just prefer some solitude.

However, having a partner to ride with offers a variety of benefits. Most importantly, it gives you someone to talk to. With depression and anxiety strongly prevalent in the trucking industry, it can be nice to have someone to talk to while you’re on the road. This is also a great way for couples to make a livable wage while still spending time together. Not to mention, team driving with your loved one on the road with you gives you both the opportunity to explore the country.

AllTruckJobs recently chatted with a mother-daughter team driving team from Werner Enterprises about their experience on the road. Check out team driving from their perspective!

One big point of contention in the team driving vs. solo driving debate is how much money team drivers make. Those leaning towards the solo-driving route will assume that fewer drivers equal more money. While this can be the case in certain situations, you can’t guarantee that driving solo is the best option financially.

When it comes to safety, the team driving vs. solo driving debate shouldn’t really matter. You should always be putting safety first regardless of your travel situation. There are both pros and cons to solo and team driving when it comes to safety but the most important aspects to consider are vigilance and communication. Communicating with your teammates and fellow drivers will ensure that you’re traveling safely.