Allie Knight, a daily Youtube sensation with over 26k followers and a CDL-flatbed driver, isn’t your run-of-the-mill flat trucker. Not only is she a female in a male-dominated industry, but she also had a very unique path that led her to where she is today. Having only been CDL driving since early 2014, she has already created a huge following in the transportation community already being a star of her very own Monster.com commercial, winning 2014’s I <3 Trucking viewer-voted video contest, and having guest appeared on the CFF Radio Show.

“I wanted to be in film/television which is WAY too ironic now. That changed to sequential art because I could draw. I wanted to be a director or a writer. Not something I usually tell people, honestly. I had a slight dabble in neuroscience, but the work wasn’t something I wanted to invest my life in.”

“I was raised in a family full of engines. My father always had a project car somewhere in the yard of some sort of small toy like a snowmobile or a fourwheeler for us to play with. I’ve always had a passion for the ride or the drive. Even when I was in high school I was the crazy one everyone would want a ride home from because I would drive just about anywhere for anyone. So after high school was college which was the University of the Arts in Philadelphia. After that I went into IT with Verizon and then Comcast. Very different yes. HA! It’s very hard to break out in the jewelry industry and I just wasn’t quite driven enough to follow thru. I moved across the country three times between 2006 and 2013, so I think the travel has always been there as well.”

“I moved to Texas, middle of nowhere Texas, with the intention of starting an online business. When that wasn’t moving fast enough I was forced to find “traditional work” which for me meant retail. There isn’t much retail in middle of nowhere Texas, so I had a very hard time finding employment. CDL’s are easy, well.. difficult, but a challenge I needed to get thru in order to make a living.”

“I started training in the beginning of January 2014. By the end of the month I had my CDL. By the beginning/mid February I was in the USA Truck training program. I was upgraded from a team driver to a solo driver by the end of March. So, there’s a few different dates you could pick for my start date 🙂 USA Truck was from that Feb of 2014 until this January of 2015. That was all Van trailers. Now I work for a small company Legacy Transportation based in Missouri. That is all flatbed, specifically skateboard right now. I’ve lost track of my miles, and I know for a lot of drivers that’s kind of a mark of excellence and how hard they work, but I don’t measure my success in miles.”

Being a Female Truck Driver

“I’m a rarity. There’s not as many of us as we’d like, especially in flatbed. So you get a lot of looks and a lot of support. Some people offer to help with your work, sometimes half the warehouse comes out just to see if I can handle it or what I look like. Sometimes I’m just another one of the guys and no one cares. It’s all over the map. It’s easier than it used to be, for sure. The atmosphere is changing and women are a lot more welcome than they used to be. When it gets annoying is when someone wants to talk to you or “shoot the ship” when I’m trying to tarp or chain or get my instructions on where to go to get loaded or unloaded. I don’t think as many guys have to deal with that as I do. And I’m too polite.” 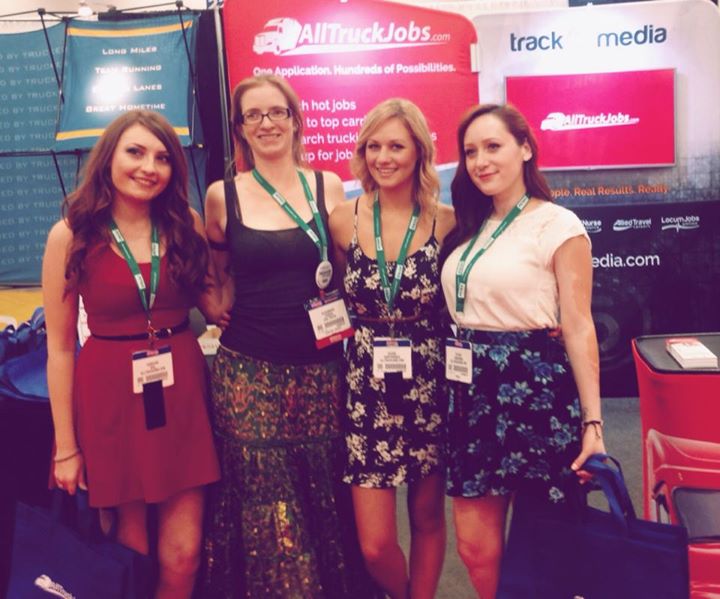 Allie Knight with AllTruckJobs.com at the Great American Trucking Show 2014

“It was snowing, I was in Ohio on my way to a Campbell’s soup plant, The sun was setting thru the trees and it was one of the prettiest things I’d seen yet. I immediately thought “where’s the camera!” .. I was still in the truck with my trainer, so it was a few weeks after that before I got my own truck. I was in my first truck for only four weeks by myself before the first video went online. I felt like i needed to share the experience. A couple other Youtube truckers helped me get the confidence to get out here so why not do the same?” 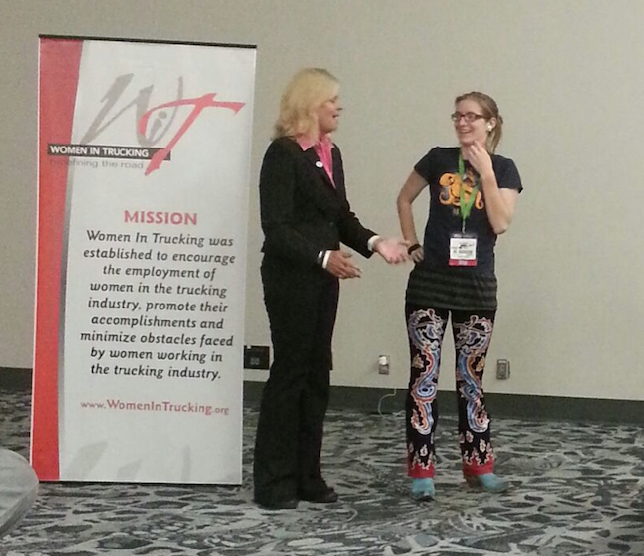 Although trucking may not have always been Knight’s greatest passion, these days, she can’t see herself doing anything else. She does admit that further down the line she could see herself owning a custom truck/car shop, but probably no time soon. Keep up to date on Allie’s incredible journey by visiting her website, AllieKnight.com, following her on her YouTube and find her on twitter @gluttnous.